The origin of climbing fiber input

Experimental anatomical studies of cerebellar fiber connections have been pursued since the 1890's. Most of this work has been done by means of the Marchi method which demonstrates degenerating myelinated fibers, and which permits the tracing of a fiber tract to its side of termination. Important information has further been provided by the study of the retrograde cellular changes, which occur in a pericarion when its axon is transected. In this way the origin of a transected fiber bundle can be determined.

The origin of the climbing fibers have been long in doubt until a very careful degeneration study according to the more specific Nauta-Gygax staining procedures by Szentagothai and Rajkovits (1959), who disclosed that the great majority of climbing fibers originated in the inferior olivary complex

This anatomical arrangement provides a possibility for selective stimulation of climbing fibbers by inserting a stimulating electrode in the inferior olive, and thus to study the physiological properties of this synapse; studies undertaken originally in the laboratory of Sir John Eccles. Eccles et al (1964, 1966a, 1966d) recorded a ?climbing fiber response? intra-and extracellularly from Purkinje cells in the contralateral vermis, following stimulation of the medial accessory olive. They concluded "the climbing fiber is the most powerful and specific excitatory synapse yet discovered in the central nervous system" (Eccles et al., 1966a).That climbing fibers may make synaptic contact with other cells (Scheibel and Scheibel, 1954) does not invalidate this argument, because the synapses on the Purkinje cells are the most abundant.

The submicroscopic structure of the cerebellar cortex

The cerebellar cortex is often described, as the best anatomically and physiologically understood circuit in the mammalian central nervous system. In his last communication on the cerebellar cortex Ramón y Cajal (1926) noted that nearly all that is known on this structure - the detailed morphology of its nerve cells, their synaptic relationships and the direction of their axons - was due to the studies made with the methods of Golgi and Ehrlich. By the end of the fiftieths and especially in the sixties of the last century the electron microscope became an effective and widespread tool of the structural studies. Investigators have studied aspects of the submicroscopic morphology of the cerebellar cortex by electron microscopy (Fernandez-Morgan, 1957; Palay, 1958;1964; Hager, 1959; Gray, 1961; Hager and Hieschberger, 1960; Dahl et al., 1962; Palay et al, 1962; Fox, 1962; Smith, 1962ó3; Herndon,1963; 1964; Fox et al., 1964.) 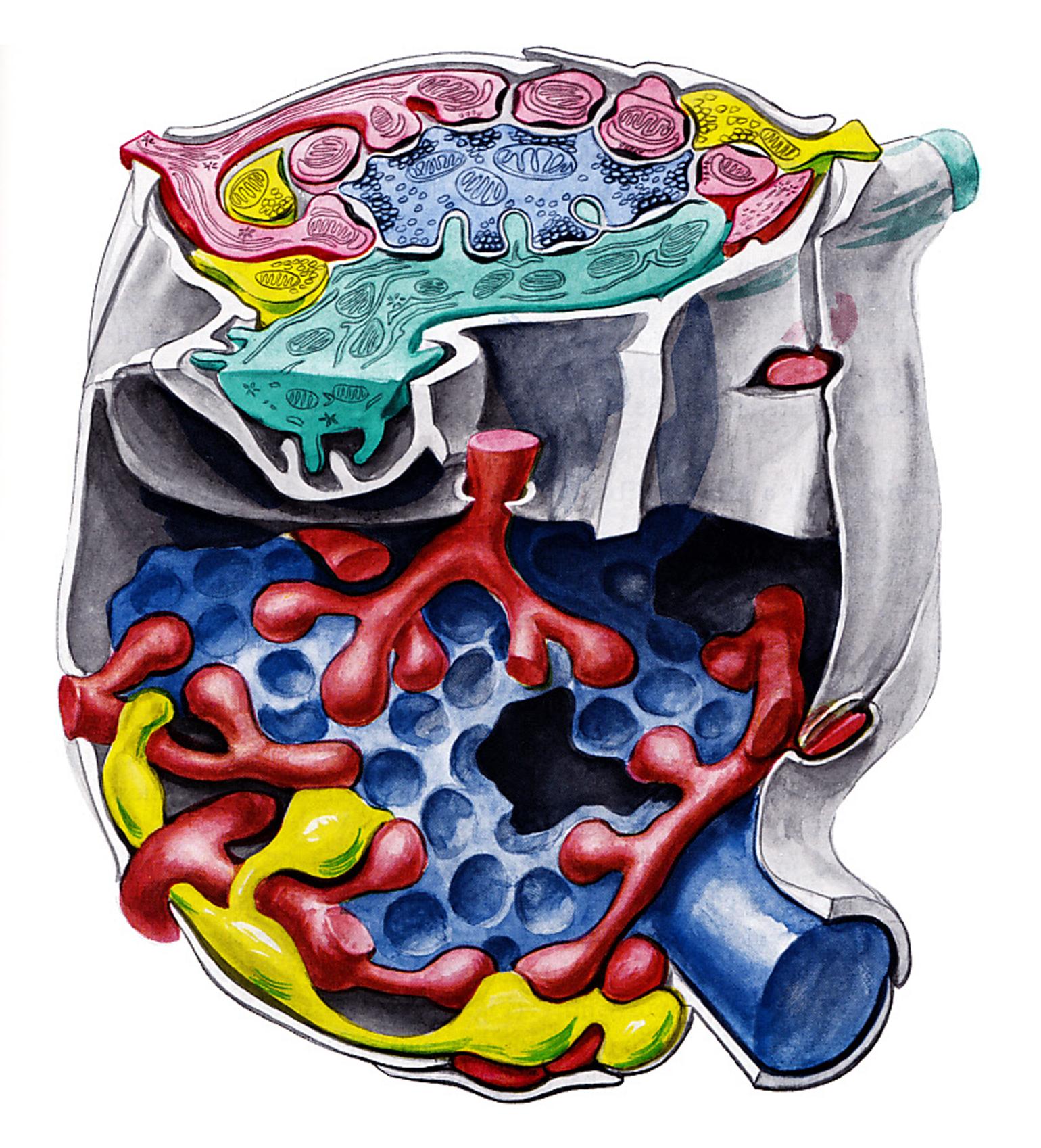 Extensive work has been carried out in Szentagothai's laboratory (Szentagothai, 1962;1965; Hamori, 1964; Hamori and Szentagothai, 1964;1965; 1966a,b) on the fine sturcure of the cerebellar cortex, and much progress was attained in the interpretation of its neuronal elements. Unfortunately, no information was available at that time to distinguish excitatory synapses from inhibitory ones from the structural point of view.

Professor Szentagothai and his coworkers - especially Jozsef Hamori - effectively contributed to the refinement of the knowledges on the cerebellar architecture, first of all, they were doing much to eliminate some confusion gathered about the so called cerebellar glomerulus. In these glomeruli are the terminal endings of the mossy fibers, which are numerically the most important afferent fibers to the cerebellar cortex, and here they make axodendritic synapses with the clawlike endings of the granule cell dendrites. Degeneration studies (Hamori, 1964; Szentagothai, 1965) have shown that the Golgi cell axon terminals in the glomerulus also make synaptic contact with the granule cell dendrites, and not with the mossy fiber terminal as had been thought (and which would provide the possibility for presynaptic inhibition). Hamori and Szentagothai (1966b) showed that the individual profiles of the Golgi axons could be identified in a single glomerulus and thus it was assumed that they all belong to the ramification of the same axon. Hámori and Szentagothai attempted to recognize the Golgi axons under the electron microscope. They succeeded in their attempts and concluded that the Golgi axons make synapses with the granule cell dendrite. The Golgi cell dendrites are also contacted by the mossy fibers, as has been demonstrated by Hamori and Szentagothai (1966a)

A very special synaptic system (crossing over synapses) was described by Hamori and Szentagothai (1964). The parallel fibers - axons of the granule cells - are crossing the sagittally oriented Purkinje cell dendritic tree. In this way about 50000-80000 parallel axon establish synaptic contact on the dendritic spines of one Purkinje cell.

As reported by Hamori and Szentagothai (1966a), the initial part of the Purkinje cell axon looked like an elongated part of the cell body, because it contained not only neurofilaments but also endoplasmic reticulum and numerous ribosomes that are usually absent in the axon.

Hamori and Szentagothai (1967) have shown that the strange membrane systems first described by Andreas (1965) in myelinated fibers of the cerebellar cortex are specific for Purkinje axons. They occur not only in the main axon but also in its collaterals and even in their terminals. This enigmatic membrane system may be used therefore as a criterion for identification of Purkinje axons and their endings. Unfortunately, only fraction of Purkinje axons have this system; hence only its presence can be used as evidence of identification and not its absence. 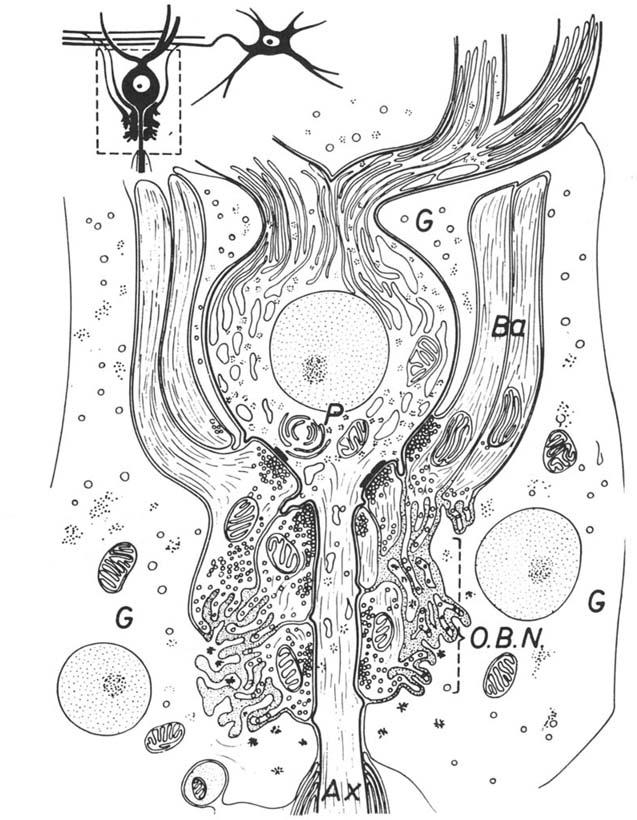 Ultrastructure of the basket synapse. Inset, upper left, situation on light-microscopic level. The greater part of the Purkinje cell body (P) and dendrite surface is covered by processes of Bergmann glia (G). The terminal branches of basket axons (Ba) have synaptic contacts with the bottom of the Purkinje cell body and the “preaxon.” The real axon (Ax) begins only some 30 um (or more) deeper and soon becomes myelinated. Finger-shaped processes of basket axon endings and similar processes of the Bergmann glia are entangled in a relatively loose “axon-cap neuropile” or “outer basket neuropile” (OBN), which is devoid of synaptic contacts.  Ref: Hámori, J., and J. Szentagothai (1965) 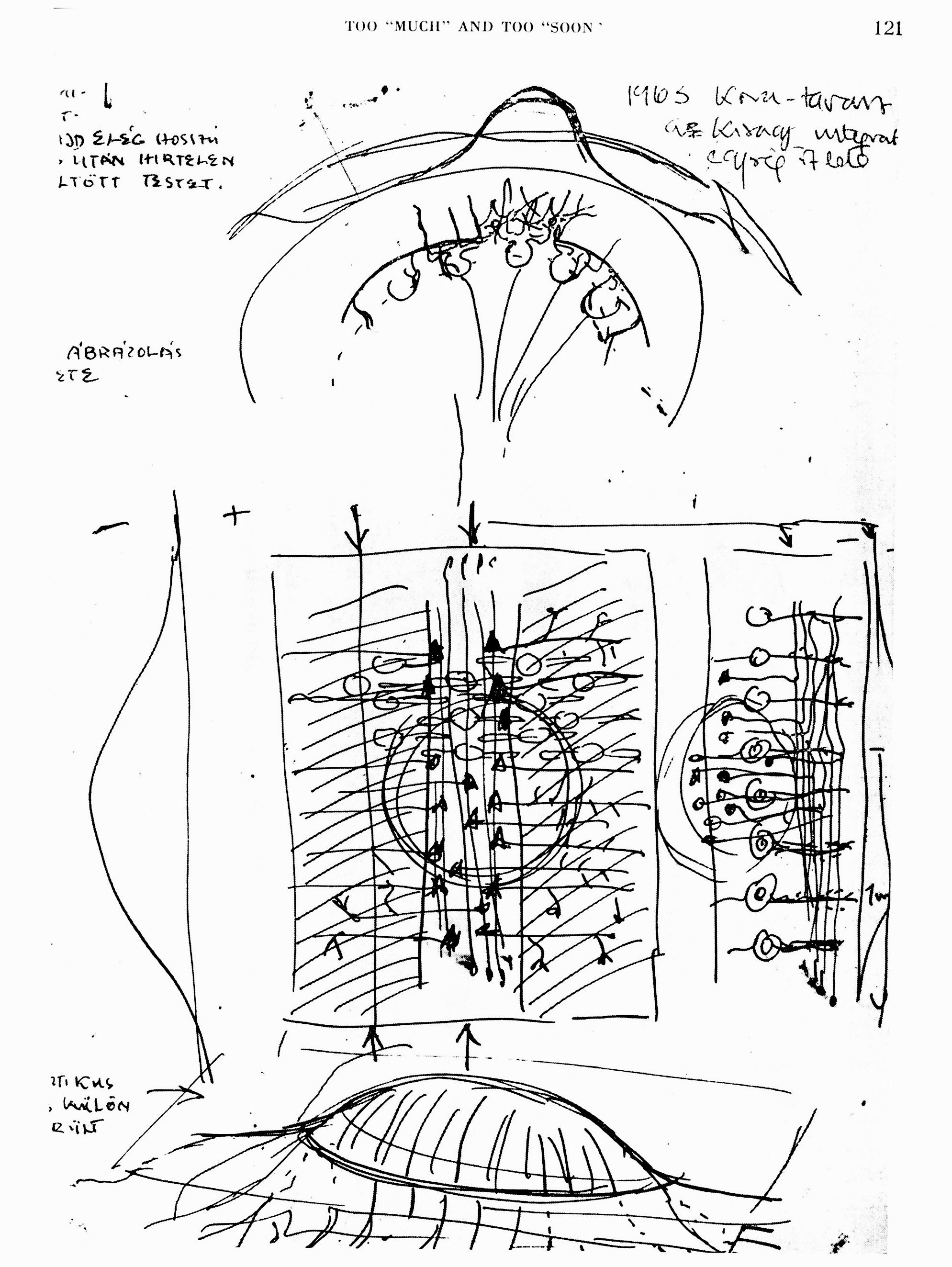 My first sketch of cerebellar cortex network operations from 1963. The central rectangle shows the cerebellar cortex in plane view. The assumption has been made that a beam of simultaneously excited parallel fibers (vertical in the diagram) would excite the Purkinje cells having their denrtitic trees embedded in this beam. Laterally positioned Purkije cells would be inhibited (harched areas on both side) over the basket cells, shown here in full black. Compare with the diagrams of the publications. Ref: Szentagothai, J. (1982))

A narrow beam of activated parallel fibres excites Purkinje cells and basket cells in its way, and that the synaptically activated basket cells exert their action on either side of this beam. Szentagothai (1963) has postulated that this arrangement would provide an ideal situation for lateral inhibition if basket cells were inhibitory, and the physiological results have fully confirmed this hypothesis. By putting a bipolar electrode gently on the cerebellar surface one can activate a narrow "beam" of parallel fibers which in its turn activates synaptically all cells having their dendritic tree in this beam(i.e. Purkinje cells, basket cells, stellate and Golgi cells). The histological arrangement is such that the basket cell bodies are located eccentrically to their own field of action, for they send their axon transversely across the folium making synaptic contact with the cell bodies of about 10 Purkinje cell on either side (Cajal, 1911; Szentagothai, 1965).

The Cerebellum as a Neuronal Machine 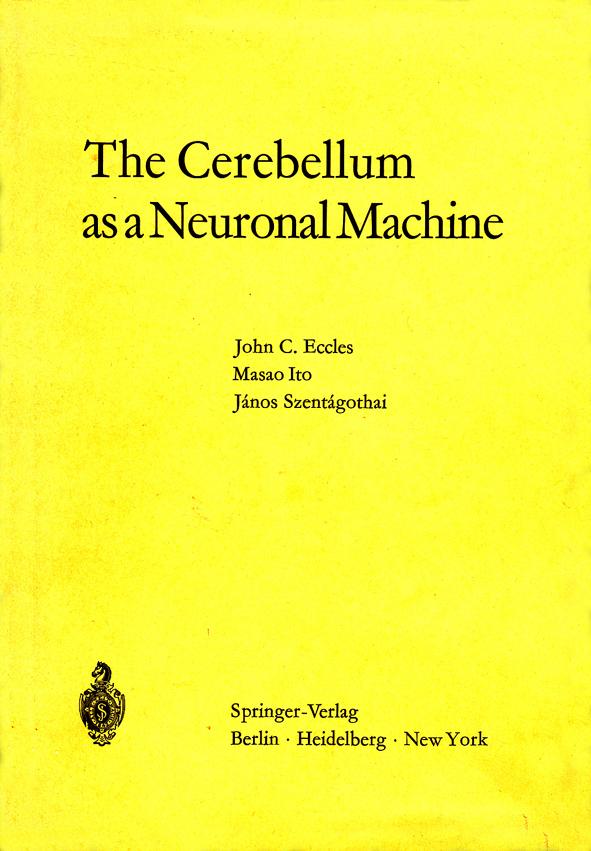 The Cerebellum as a Neuronal Machine

morphological characteristics of neuronal elements in the cerebellar cortex have become well documented during the fifteths; however, the most outstanding contribution to understand the function of the cerebellum was made by the monograph on the cerebellum in the mid sixties (Eccles Ito and Szentagothai, 1967). The development of microelectrode recording and electron microscopy provided the methodological background leading to a new age in cerebellar physiology in the 1960s. Janos Szentágothai with morphological studies and John Eccles by means of electrophysiological analysis provided for the first time a complete picture of the functional architecture of the cerebellar cortex, to use the term "excites" or "inhibits" when describing the activity of individual elements in the cerebellar cortex, by identifying the excitatory and the inhibitory nature of each cell type (Eccles et al., 1967).

Janos Szentagothai was well aware that the indirect correlation of synapses, connections, and nerve cells would not be enough to understand the operational features of neural networks without the exact knowledge of the number of participating elements. Therefore he initiated a series of quantitative light and electron microscopic studies in the cerebellum in the early seventies, together with Miklos Palkovits, (Palkvits et al., 1971a,b,c, 1972) and which eventually led to some modifications in the basic cerebellar network model. Incidentally, computer simulations of the cerebellar neural network using these quantitative data correctly explained some of the electrophysiological findings, which were incompatible with the earlier model. These studies were conducive to the development of the modular concept of organization of the central nervous system, and to one of the first attempts to simulate neural networks with the consequent predictive capacity to understand function (Pellionisz and Szentagothai, 1973a,b).
(By J. Takacs)