Scientific contributions of Professor János Szentágothai and his research group 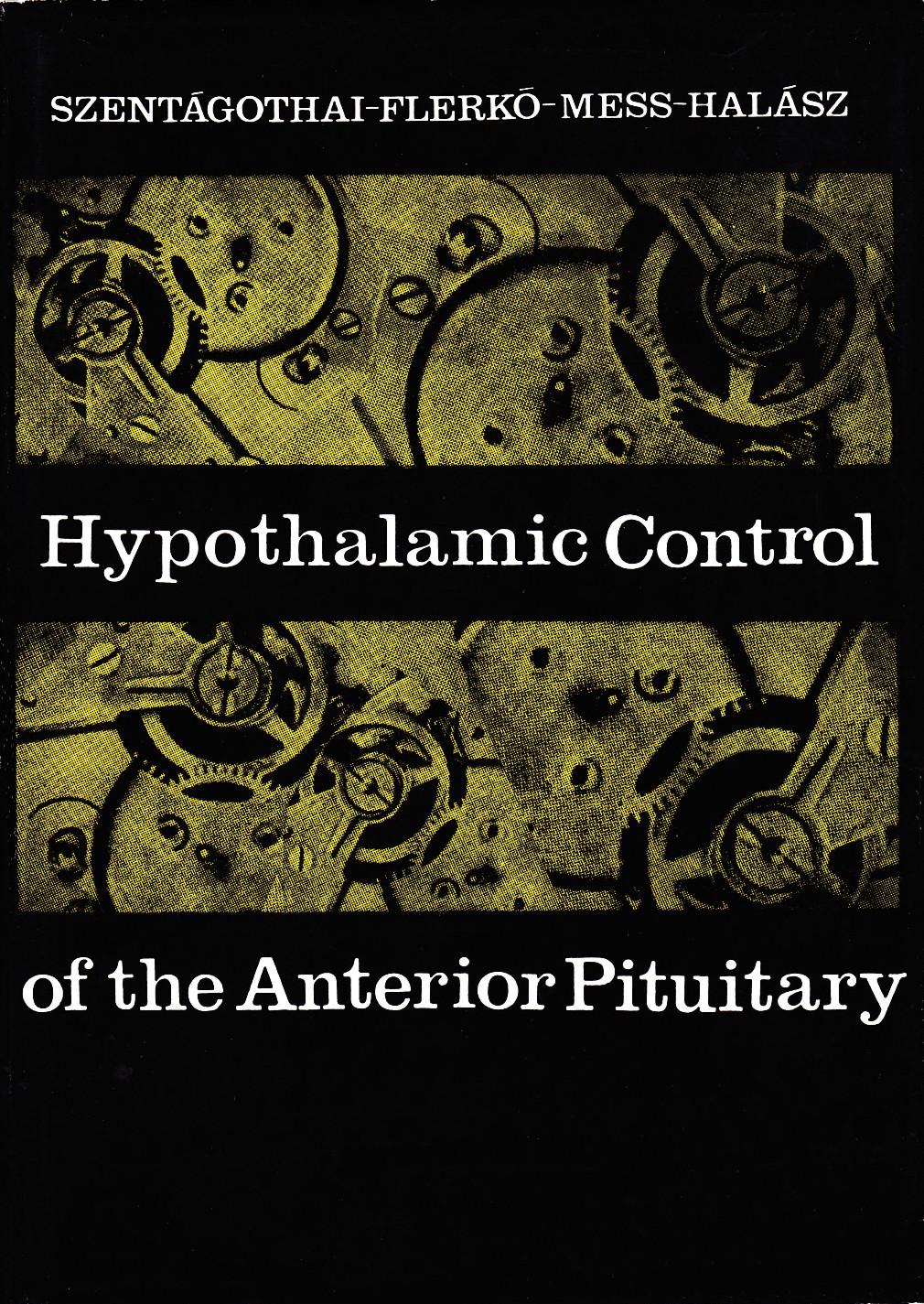 Szentagothai, J., B. Flerko, B. Mess, and B. Halasz (1962) Hypothalamic Control of the Anterior Pituitary. Budapest: Akadémiai Kiadó.

As chairman  of the Department of Anatomy, Medical University of  Pécs (1946-1963), Professor Szentágothai organized a very active, productive, internationally well known and recognized neuroendocrine research group. This group has significantly contributed to the development of neuroendocrinology as a discipline. Szentágothai  and his associates published in 1962  a monograph (2nd edition of this book appeared in 1968)  entitled  "Hypothalamic control of the anterior pituitary", seven years after the first monograph by Geoffrey W Harris (London), dealing with the neural control of the pituitary gland, came out. The monograph of Szentágothai and his associates contained a large amount of original observations obtained by the research group and published in international journals.

Szentágothai was the first to postulate that the tubero-infundibular pathway, located in the medial basal hypothalamus connects the hypothalamus with the pituitary portal-vascular system.  By implanting  anterior pituitary tissue into the hypothalamus, his group  was the first  to demonstrate that only the medial basal hypothalamus is capable of maintaining the structure and function of the transplanted pituitary tissue and named this region the hypophysiotrophic area. They were faced with the following question:  Is the hypophysiotrophic area merely the final common pathway, which simply converts into appropriate signals and conveys the influence of other hypothalamic and extrahypothalamic structures to the pituitary, or does this area exert also a regulatory influence on the anterior lobe by itself? 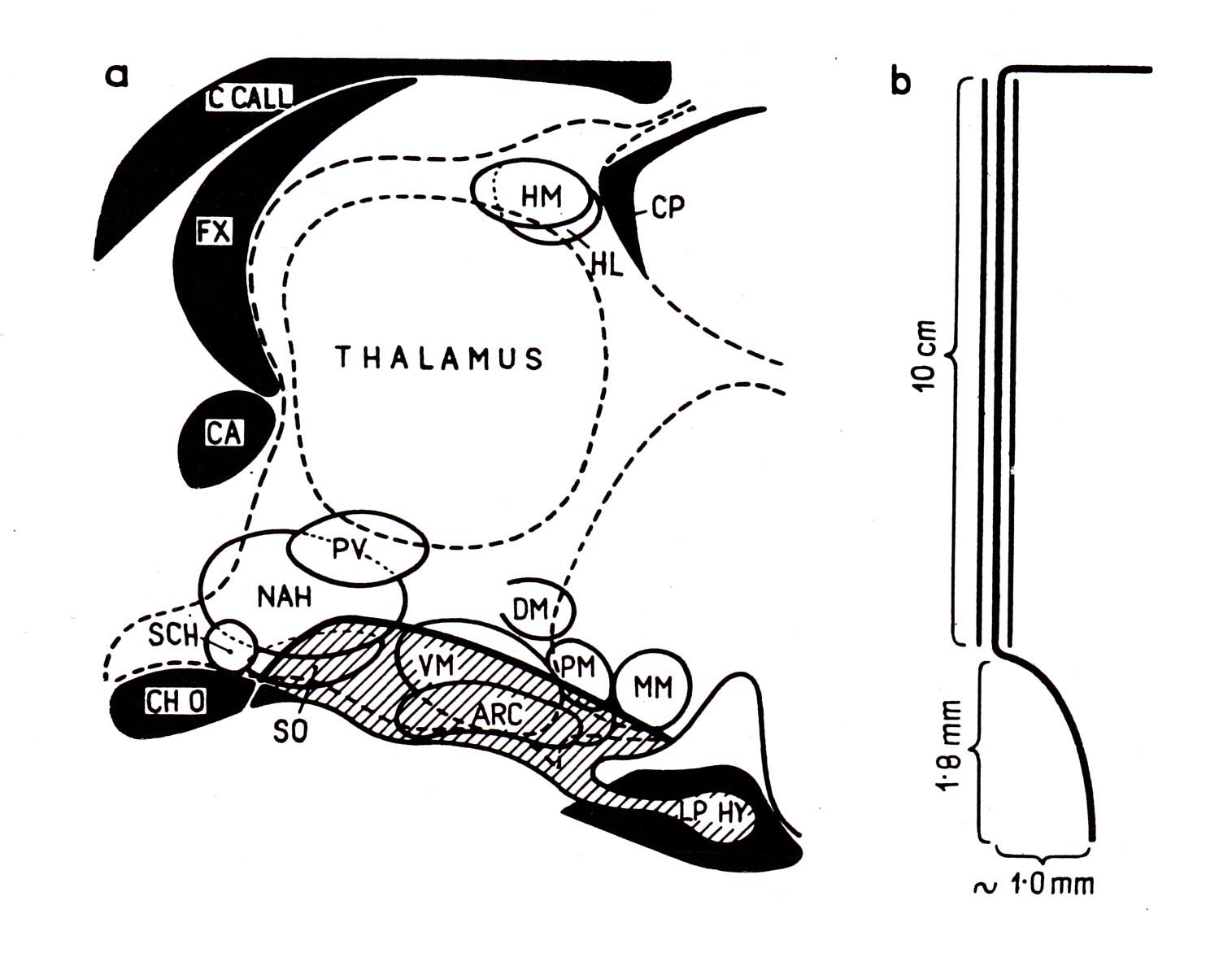 a) Schematic drawing of the experimental preparation in animals with neural isolation of the hypophysiotrophic area. The area cut around (hatched region) is in contact with the pituitary but is disconnected from other parts of the brain as indicated by the heavy line. b) A schematic drawing of the knife assembly used for hypothalamic deaffereniation (Halász and Pupp 1965)

To study this question, a special knife has been designed by his associates. By means of this knife it was possible to cut completely around the hypophysiotrophic area, leaving the area in contact, by means of the unbroken pituitary stalk, exclusively with the pituitary. The technique afforded also means for the partial interruption of the neural connections of this area. Thus, it was possible to study the role of the afferent nervous pathways to the area controlling pituitary function. 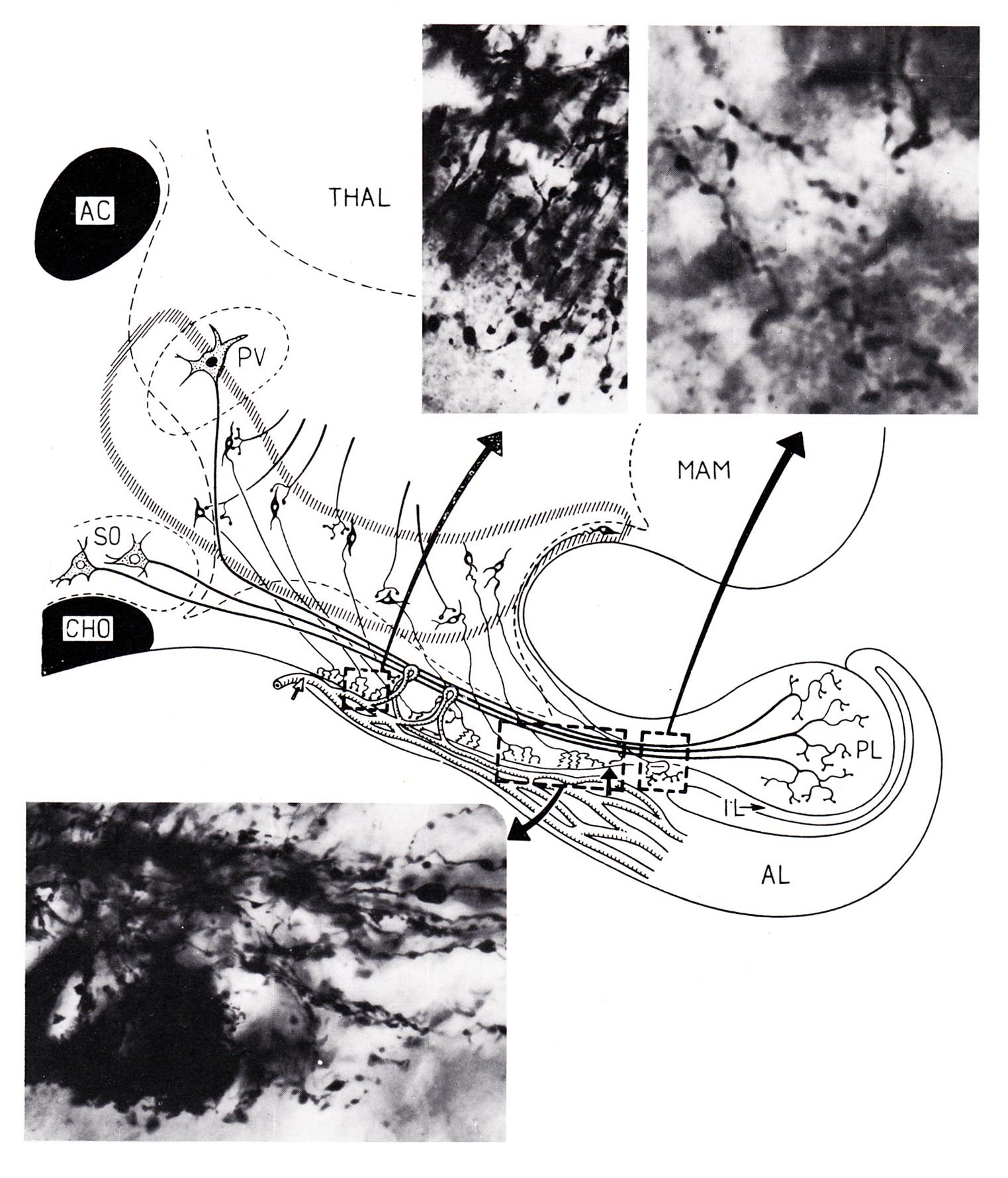 Diagrarm of a midsagittal section of the hypothalamus, showing arrangement of the coarse fibered supraoptico-neurohypophyseal tract and the fine fibered tubero-infundibular tract. The former originates from the large cells of the supraoptic nucleus (So) and is joined by similar fibres arising from the paraventricular nucleus (Pv). Its fibers can be traced in Golgi pictures clearly and exclusively to the posterior lobe (PL). This tract is crossed by the fine axons of the tubero-infundibular tract arising from small nerve cells that are situated in a halfmoon shaped area (surrounded-by hatched zone) immediately beneath the walls of the 3rd wentricle. This so-called „hypophysiotrophic area” is desribed in detail in Chapter III. The fine axons of this tract terminate exclusively in the surface zone (zona palisadica) of the median eminence and of the most proximal part of the stalk. (Rostral and caudal ends of this zone are indicated by arrows.) The region surrounded by oblong is shown in a lower power photograph below in a sagittal Golgi section.

By using the described experimental approach, several studies were performed in collaboration with groups, including foreign research laboratories. The observations, published in well-known international journals, indicated that the hypophysiotrophic area, instead of simply forwarding the influence of other hypothalamic structures to the pituitary, plays a regulatory role in the control of the anterior pituitary by itself.

Professor Szentágothai and his pupils were the first  who postulated that there are oestrogen sensitive neurons in the anterior hypothalamus, between the optic chiasm and the paraventricular nucleus. This assumption was based on their observation that ovarian tissue implanted into this region caused a decrease in uterus weight. Other tissue placed into this region or ovarian tissue implanted into other brain regions did not cause similar changes. In addition, his associates obtained data suggesting that there are not only oestrogen, but also androgen sensitive neurons in the anterior hypothalamus, and that the feedback action of sexual steroids on the control of gonadotrophic function is at least partly exerted on these nerve cells. His associates have reported that anterior hypothalamic lesion causes constant oestrous and polyfollicular ovary.

Professor Szentágothai and his co-workers have provided experimental data suggesting that thyroxin may act directly on pituitary TSH secretion. 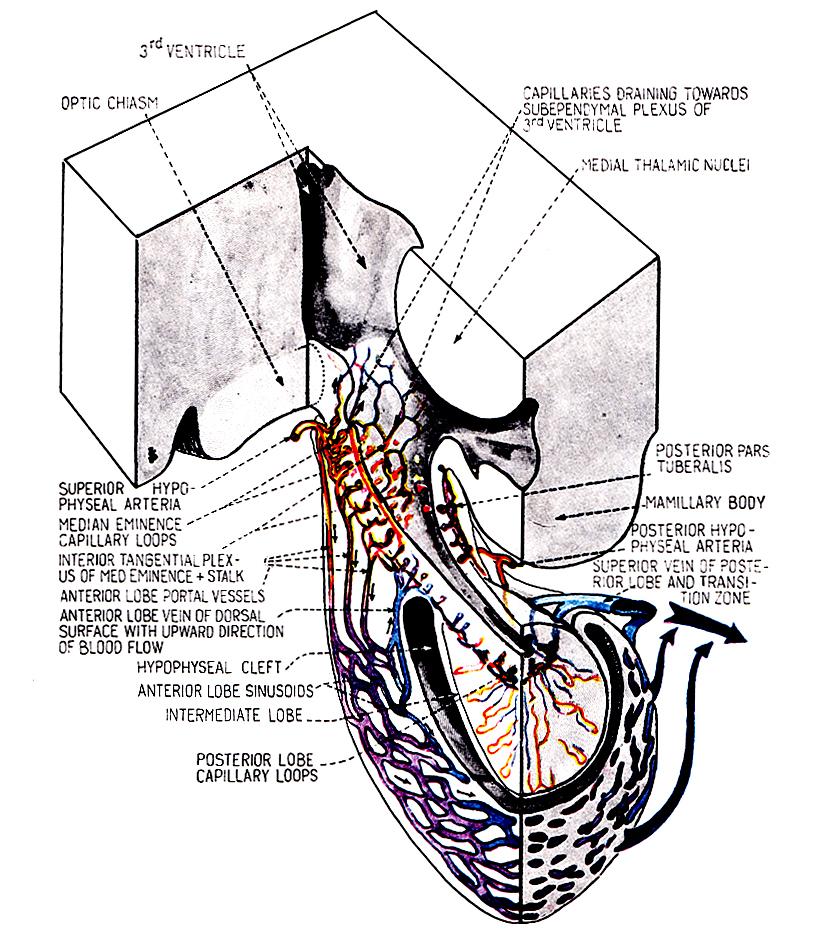 Diagram illustrating schematically the pituitary circulation in the dog and the cat as revealed by recent investigations of Török (1960). Short arrows indicate direction of blood flow.

Investigating pituitary blood circulation, Professor Szentágothai and his associate                      have observed, in addition of the generally acknowledged description, that there exists in the most interior layer of the median eminence and of the infundibular  stem, another capillary system in which the blood flow is in the opposite direction, i.e. leading from the median eminence  capillary loops upwards into the medial capillary network of the hypothalamus. They assumed that this upwards blood flow may represent a short loop or internal feedback, anterior pituitary hormones acting directly on hypothalamic neurons. The group provided experimental data, which supported this assumption: anterior pituitary tissue implanted into the infundibular recess inhibited pituitary ACTH secretion.

He and his associate demonstrated that there are nerve connections between the adrenal glands and the hypothalamic ventromedial nucleus. They observed that the size of the cell nuclei of the neurons of this cell group increased on the contralateral side of the removed adrenal and on the ipsilateral side the nuclei of the nerve cells were shrunken.

The very briefly mentioned observations and suggestions indicate that Szentágothai and his research group was very productive, significantly contributing to our knowledge concerning neuroendocrinology. The members of the research group were involved in all activities of neuroendocrinology (organizing meetings, editorial board of international journals, co-editors of books, etc).